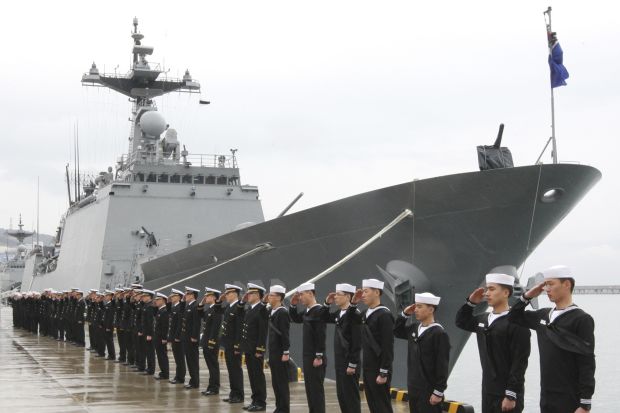 Darren Winters discusses how a South China Sea shutdown could come about if US-China trade talks breakdown. If US-China trade talks descend into a military muscle flexing spectacle then a hot war in the region now seems almost inevitable. The reason for concern is that US-China trade talks have ended with a report in the Global Times (January 9) that China’s anti-ship ballistic missile DF-26 has been mobilized to Northwest China’s plateau to target US warship trespassed into China’s territorial waters. But China’s latest military manurers contradicts US President Trump’s earlier tweet December 7 that “China talks are going very well!” Could this yet again be a suckers rally on the back of Trump’s tweet?

In the one corner is the world’s threatened superpowers, US who will not accept a new rising star on the bloc, China and its threat to dollar hegemony. But the red dragon’s newfound economic might, its massive military spending could mean that China is now confident, ready and prepared to take on the bald eagle in the South China Sea. The US-China’s battle for world domination could soon begin, if so it will be decided by the way it was ever since the naked ape crawled out of his cave, the tribe with the best spears dominates. Nothing has changed the only thing that has progressed is the naked apes’ weapons.

A South China Sea shutdown would have an impact on more than $5 trillion of trade flowing through the region every year. “Should a conflict arise … the consequences for global trade would be gigantic,” Francois Godement, director of the Asia and China program at the European Council on Foreign Relations, told CNBC via telephone last year.

As Darren Winters explains, the South China Sea is a vital trading passage for China, Japan, and Korea, as well as other nations on the western rim of the Pacific, which links their only bulk trading route with key markets in the Americas and Europe.

So South China Sea shutdown would impact commodities, logistics, and insurance sector. Moreover, if the Trump administration were to patrol more frequently China’s artificial that could have a negative impact on China National Offshore Oil, one of the mainland’s biggest crude producers.

Freight costs would increase as shipping companies either pay more for their insurance or spend more on fuel by opting to take longer routes to avoid the conflict area.

The Korean won and the Taiwan dollar might depreciate. But the safe-haven Japanese yen would likely benefit. Oil and commodities might also rally from a South China Sea shutdown.

A South China Sea shutdown would trigger a risk-averse reaction with investors scrambling to safe-haven assets. Precious metals, particularly gold would most likely do well in such an event.