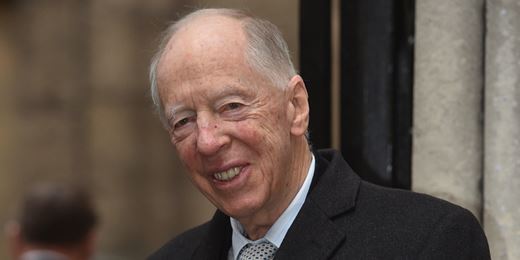 Jacob Rothschild, chairman of RIT Capital Partners remains risk-averse, writing in his full-year results for the £2.7 billion investment trust has warned that “70 years of prosperity is now at risk”.

“More than 70 years of hard work in creating the post-war, rules-based systems of trade and mutual self-interest is in danger of being thrown away”, warned (Lord) Rothschild.

As Darren Winters explains, Rothschild remains risk-averse despite seeing his performance bonus more than halve to £418,000 last year. The ‘risk-averse’ positioning of the global multi-asset fund meant that his fund lagged the rally in world stock markets and its inflation-linked benchmark. Rothschild, 81, saw his total remuneration deal fall to £1.36 million in 2017 from £1.69 million in the previous year, with the bonus dropping from £1 million in 2016 to £417,949.

So Rothschild remains risk averse for the year ahead. But why? 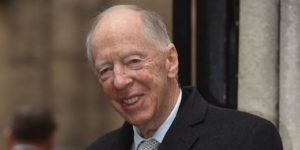 One reason why Rothschild remains risk-averse is the rise of protectionism, the risk of US-China trade war and the damage that Brexit (UK leaving the EU) could do to trade in Europe. Protectionism is pushing back globalism of the post-WWII era.

‘Since the last World War, we have enjoyed some 70 years of patiently crafted international cooperation, which is now threatened,’ wrote Rothschild.

So Rothschild remains risk-averse because protectionism is rising at a time of slowing global economic momentum
‘The impact on China of either straightforward tariffs or of a “border-adjusted tax” would be negative, at a time when Chinese economic momentum is fading and when it has to deal with the problem of misallocation of capital on a huge scale,” wrote Rothschild.

Rothschild remains risk-averse- but could it be overdone?

Already we see popular protectionism being parallelized by an elite western revolt. In Britain, the House of Lords (Rothchild is a life peer) is vetoing Brexit (The UK’s exit from the EU) and across the Atlantic, the Democrats are moving to take the midterm elections in the US. If the Republicans don’t win the house majority there is a possibility that Trump will be impeached (removed from office). I’ll be impeached if Democrats win midterms“, said Trump.

Chinese officials recently warned that “in the event of a trade war, China has a much greater ability to endure than the US”.

But Rothschild remains risk-averse perhaps because of the “deeply worrying geopolitical situation” whether it be in the middle east in Syria, Iran or with China-Taiwan.

Nevertheless, Rothschild sees a few bright spots. For example, US, the proposed tax reduction for companies and individuals, reforms of an over-regulated system and increases in fiscal and infrastructure expenditure.

‘These, however, come at a time late in the business cycle, when the labor market is close to full employment, with wage increases up by some 4% over the last few months.”

‘Valuations are at the high end of their historical range, inflation is returning and in these circumstances, it is likely that interest rates in the US will rise meaningfully.’