Political instability is likely to weigh on risk assets going forward. The mass movement of people due to ongoing wars in Africa and the Middle East together with a global economic downturn, particularly in Emerging markets is contributing to a climate of political instability. Europe’s wild card, Italy is the latest to have succumbed to popular politics and has elected a hard line anti-migrant, Eurosceptic populist government. 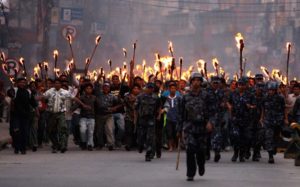 Italy’s minister of the interior Matteo Salvini, a populist firebrand of the hard right is planning to adopt illegal (unconstitutional) laws that are reminiscent of Italy’s fascist past and would not look out of step with fascist Germany of the 30s. Salvini vowed to turn “words into action” in his drive to root out and expel thousands of nomadic Roma from Italy. Italy’s minister has called for a new census of Roma and for all non-Italian Roma to be expelled from the country. Political instability in Italy is being whipped up by rising joblessness and using the oldest trick in dirty politics of scapegoating immigrants and the Roma communities.

“The party for migrants is over,” said Salvini.

But someone should remind Italy’s minister that 27 million people left Italy since the late 1870s.
Nevertheless, riding on a wave of fear Salvini said, “Italians and their security comes first”.
So in this new heightened climate of political instability in Europe Salvini warned last week that it will be decided within a year “whether a united Europe still exists or not.”

What if political instability were to spread to Germany, the bedrock of the European Union?

“If there are 100,000 illegal migrants in our country we have to force them to leave.”

But what about Germany’s (Europe’s) demographic time-bomb (retiring baby boomers and anemic birth rates which is likely to wreak havoc on public finances. The German right-wing leader doesn’t see migration as a way to solve the demographic problem. “We have to have more babies so that our welfare system is working.”

Hungary, which also has one of Europe’s most anti-migrant governments recently announced that it would levy a 25% tax on groups that support immigration.

Europe’s political instability is giving rise to anti-migrant parties which are out of lockstep with the EU’s pro-immigration stance.
To mitigate the fallout the EU is currently considering plans for migrant processing centers in North Africa.

But this new wave of European political instability could be a genie out of the bottle.

Today its Europe’s anti-migrant parties and tomorrow it could be the very same populist governments that decides to default (walk away from their obligation) on their sovereign debt?

If it all about playing a tune that pulls in votes then what if the populist governments decide to leave the European Troika (the bailout creditors) high and dry.

Meanwhile, Brexit is starting to look like a good idea in this new wave of European political instability.

The UK Prime minister May could be playing the long game and thinking why rush an unfavorable deal with the EU if it is on the verge of collapsing. Put another way, Backpedal Brexit could be about stumbling the negotiation in the hope that the EU dissolves.
There is chatter that the Prime minister is pushing for an agreement that looks like a single market for goods but not services.

May is traveling to Brussels this week for an EU summit. But don’t hold your breath for a breakthrough in a UK-EU trade deal.

In the US, political polarization is leading to political instability.

The Trump administration hit a new low in the eyes of the international community with the Attorney General Jeff Sessions announced a new “zero tolerance” policy of referring all border crossings for federal criminal prosecution, which has led to children being separated as their parents are sent to jail.

From April 19 to May 31, some 1,995 children (even toddlers) were separated from their parents.
Children are being held in facilities run by the Office of Refugee Resettlement within the Department of Health and Human Services, such as a converted Walmart in Texas which houses young boys that were recently opened to reporters.
Child welfare groups have expressed concerned about children’s safety and well-being.

Whilst Trump has since backed down from the family separation policy the immigration crisis is likely to impact Trump’s midterm election and I am now less convinced about landslide victory in the midterms.

As a said in a previous piece, if you want a peek into the future set the time machine back to 1920s and 1930s. The Nazis kept a census of Jews and they too separated children from parents.

Moreover, it was the transatlantic trade wars of the 1920s and 1930s between the US and Europe that help lead to the Great Depression and the rise of political instability, fascism in Europe which eventually led to WWII.

In this heightened period of political instability trade war tensions between the EU and US are escalating.

Trump’s threatened to impose 20% tariffs on European cars in response to the EU’s decision to impose 25% tariffs on more than $3 billion worth of US goods as retaliation for U.S. tariffs on steel and aluminum.

The current road of political instability, protectionism, nationalism, intolerance could take the world to another war. “Those who do not learn history are doomed to repeat it. Wrote George Santayana,

Political instability is making forecasting even dicier. USD strength, EM weakness, earning risk from a trade war could all play out.

One Reply to “Political instability”