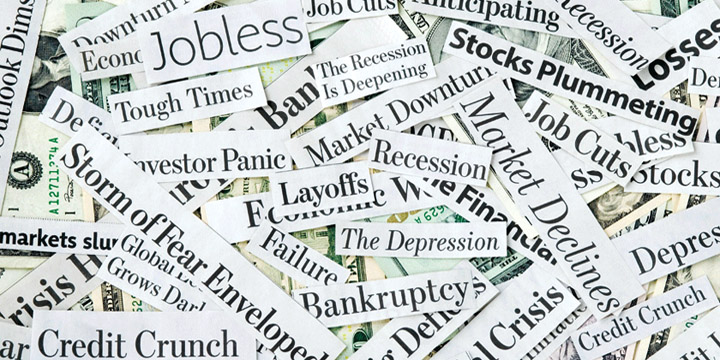 It is happening again another global economic crisis is on the horizon, Darren Winters takes a look at the signs.

The coronavirus, the recent black swan event is steepening the global economic downtrend. Global shipping giant Maersk was the first to fire off a distress flare as it reported a revenue fall of 5.6% to $9.67 billion, missing expectations of $9.94 billion. Maersk, the Danish shipping giant is considered to be a barometer of global trade.

“As factories in China are closed for longer than usual in connection with the Chinese New Year and as a result of the COVID-19, we expect a weak start to the year,” the company said.

As I wrote in a piece, entitled Coronavirus Impact dated February 4, the first sector likely to experience challenges will be transport logistics companies. That is now in play and Maersk could be the first domino to fall.

With data regarding the coronavirus contagion and death rates, being unreliable at best, investors` attention has moved to the economic fallout and the potential financial contagion of the virus.

But if global logistic companies, their suppliers are the first domino to fall, which then will likely be the next domino to tumble. Let’s play a game of falling dominoes.

British banks have the largest exposure in China and they could be the next wobbly domino to fall.

A global economic crisis, which starts in China, is likely to rattle a few heavyweight British banks who have a combined total of 28% exposure of China’s $796 billion in offshore loans

US Banks have the second largest exposure with 11%, Japan 10% and France 6%. Germany has just 5% exposure to China’s offshore loans.

The British bank HSBC Holdings PLC is the most vulnerable to a global economic crisis, bearing in mind it is the bank with the most exposure of China’s offshore loans

HSBC’s outstanding loans in China grew 12% in the year ended June 30, to $36.2 billion, according to its latest financial report. Standard Chartered PLC said in its interim statement for the same period that its overall exposure to Chinese loans rose 30% to $58.3 billion.

Darren Winters notes that British banks are already under stress, with Brexit and a wave of Chinese no performing loans is only likely to add to the problem, which could also put downward pressure of British banking stocks.

Twenty years on and the world is more globally connected so the next economic downturn could cause global financial contagion, bearing in mind China’s $796 billion in offshore loans are held by global foreign banks.

The British bank HSBC with the most exposure to China’s offshore loans recently announced massive job cuts with 35,000 jobs to be axed as profits plunge.

Is HSBC the next Deutsche bank?

Maybe too HSBC CDS spreads will widen. Maybe too HSBC’s clients will pull a billion dollars a day, in a modern version bank run.