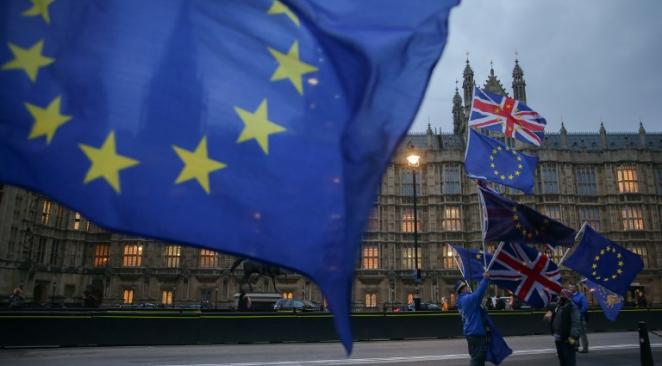 Fake Brexit is the next play according to the outspoken, erudite UKIP chief whip and European Parliament representative Godfrey Bloom.

Indeed, Godfrey Bloom is somewhat of a political rock star with a lot of populists groupies (judging from his thumbs up). Godfrey Bloom, educated at St Olave’s Grammar School, the Royal Military Academy, Sandhurst, a city economist turned politician (whose father was a WWII fighter pilot) has no fear venturing into the danger zone with guns blazing.

In 2013 Godfrey Bloom took on the fractionally reserved central bank system in the EU parliament, a no-go-zone that very few politicians dare talk about in public.

The two-minute clip where Godfrey Bloom rattles the “Deep State” by aiming his flashgun on entire banking system which he refers to as a “scam.” Just the audience reaction makes it worth watching.

But as Darren Winters explains, it is Godfrey Bloom Fake Brexit view which was put forward in his most recent interview that is grabbing the limelight, albeit in the alternative media.

A fake Brexit will not surprise avid readers of this blog. I too forecasted that PM Theresa May (dubbed Theresa maybe not) would back-pedalling Brexit. The blindingly obvious clue being that May is actually identified as a “remainder” prior to the referendum.

Was a fake Brexit all along

Not only is the PM a closet remain so too is the chancellor and the Home Secretary who all campaigned for Remain. Moreover, if you throw into the equations the banks and big business and a remain House of Lords and Commons, and it becomes obvious that it (Brexit) was never on the cards. “Brexit was never going to happen,” said Godfrey Bloom.

Perhaps the end game will not even be a fake Brexit, maybe it will be a no Brexit

The public will be made to beg for what the UK’s ruling elite want, a no Brexit. The world’s oldest fiat currency, GBP is being beaten up on the foreign exchange and that is hurting the most vulnerable with least reserves and unable (least financially savvy) to hedge with foreign assets.

GBP (which was once the world’s reserve currency) has been turned into Europe’s Argentine Peso with a massive 80% depreciated against the USD and 50% against the Euro in the last decade.

So inflation is starting to squeeze UK household budgets.

But the worse has yet to come, according to Godfrey Bloom. “We are inclined to believe that the worst possible deal is likely going to be put into place deliberately,” said Godfrey Bloom.

So British PM May’s new slogan “no compromise”, borrowed from Europe’s deadliest company (Heckler & Koch) is destined to fail.
Why?

Godfrey Bloom believes that the aim of such a deliberate failure is to soften the public up for an eventual repeat of the referendum, in the hope that an outcome more to the liking of the deep state.

For the EU this would be business as usual. In other words, if the Brussels nomenklatura does not like the outcome of a referendum there is a repeat until the “correct” vote is delivered.

British people should brace themselves for a “fake Brexit that will fool no one”, said Godfrey Bloom

But all the UK is asking for is a free trade which means no customs or taxes on any goods traded among the UK and EU.Trade is controlled very carefully by complex agreements based on tariffs. Most of the world trade is governed by the World Trade Organization, which could be a figure of well over 95%. Moreover, the European Union is a customs union, the last of its kind in the world.

Centrally controlled in Brussels, uses a method of operation which Americans call pork-barrel politics. In other words, the US believes that the EU is operating a conspiracy to protect politically favored industries, explains Godfrey Bloom. So the EU is a protectionist cartel, a labyrinth of self-interest.

A fake Brexit will play out because the EU’s function is to protect home industries, French farmers, the European wine industry, the Italian leather industry, French, German and Czech automobile manufacturers, textile and raw material companies.

Fake Brexit is likely to be the outcome because the EU, as a protectionist cartel also has political clout across the English Channel. The UK is the world’s biggest BMW customer, so why is the UK paying £40 billion for a trade deal? This is absurd explains Godfrey Bloom. “Imagine being a top customer at Fortnum & Mason or Bloomingdales and being charged an entrance fee!”.

“The elephant in the room is that the goal of the EU is the fulfillment of a great noble dream, a centrally governed European Federation.”

So if fake Brexit is then a reality what are the current negotiations about?

“The current negotiations are not about trade in reality, but the pursuance of that dream. The political and bureaucratic class cannot speak that truth, because no matter how noble the great dream is, nobody actually wants it,” said Godfrey Bloom

The Deep State will back-pedaling Brexit, it will be a “fake Brexit” for those who can see behind the veil.

“ A true Brexit will not be available. The political ideal of a federal Europe runs too deep and has been around too long.
Politicians remain in office for relatively short periods of time. The bureaucrat can play the long game,” added Godfrey Bloom.

So there will be a fake Brexit, dressed up to look like Brexit

But it will fool nobody. But maybe it won’t come to that because fake Brexit will be replaced by a real Brexit when the euro and the EU collapses which will happen within the next five years, according to Godfrey Bloom

See Godfrey Bloom “We gonna get a fake Brexit”.