Darren Winters takes a look at what might be playing out on the global stage… a dollar hegemony fightback. 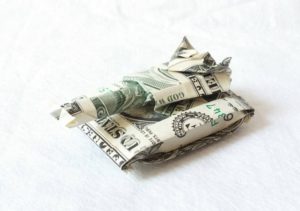 The Trump administration is somewhat puzzling, disruptive and even chaotic. But maybe not so when it is viewed through a dollar hegemony fightback prism. Take, for example, Trump’s proposed tariffs on steel and aluminum which is great news for US steelmakers. In the words of US Steel CEO David Burritt, “this feels like the beginning of a renaissance for us.” In anticipation of a boost in domestic demand US Steel now plans to reopen idle plants and create 500 jobs.

But as Darren Winters points out, increasing the price of steel for domestic manufacturers, through tariffs, also puts American industry at a competitive disadvantage because it raises their input costs. So Carrier, the makers of airconditioning units will now have to pay more for their steel. Whirlpool dishwasher, fridges and washing machines could now end up being more expensive in the US compared to foreign made white goods in European and Asian who are able to purchase cheaper steel.

Moreover, American autos, Chevrolet, Chrysler, Cadillac, Dodge will all have to pay more for their steel (all the above could be a shorters delight). As explained in Trade War On The Horizon 200,000 Americans lost their jobs to higher steel prices than the total number employed by the US steel industry.

Is Trump economically illiterate?
Take a few steps back and as Darren Winters suggests, we should look at the bigger picture through a dollar hegemony fightback prism and maybe there is some sense in the madness. Defence Secretary James Mattis recently said, “if you threaten us it will be your longest and worse day.”

But what country would commit suicide threaten the US Empire with its 800 military bases in more than 70 countries around the world?

So when Mattis talks about “threatening us” that is probably code for threatening US hegemony, after all the three pillars supporting the USD is Treasuries, the petrodollars, and the US military.

Already two pillars have become less stable. The strategic Sino-Russian nexus to build the New Silk Road East fuelled with Iranian, Venezuelan oil price outside the USD is a threat to petrodollars. Moreover, a completely independent financial system with its own payment system, development infrastructure bank and rival currency would ultimately challenge USD reserve currency status.
So the dollar hegemony fightback is about preparing America’s readiness for war and without a domestic steel production America would become a toothless tiger, hence Trump’s real support for steel.

Just join the dots and dollar hegemony fight back is no longer about globalism but about nationalism, patriotism and rallying its citizens around the flag in readiness for war. “We all bleed the same blood of patriots” Donald Trump -the war president?

But Europe was devastated by war, WWII left 50 to 80 million people dead, devastated families, destroyed infrastructure and scarred an entire generation. The EU would naturally prefer to trade with China and Russia. Europe views natural resource rich Russia as a potentially strategic trading partner, a friend where both the EU and Russian can benefit from competitive advantages of trade. Why then is the US gearing up its defense system in Europe? Who is the enemy?

“If you put tariffs against your allies one wanders who the enemies are,” said Mario Draghi in response to US tariffs imposed on the EU.

But the EU, a CIA project, has no independent foreign policy.
Put another way, the dollar hegemony fightback could mean to divide and conquer Europe. So the EU is being fragmented. The US doesn’t want the EU to become an adult, and develop its own independent defense and foreign policy because an independent EU would then pivot East, join Russia along the New silk road outside the dollar hemisphere, thereby making NATO defunct.

So Brexit will provide the template for other EU members to leave.

As Darren Winters points out, other EU members will follow because Trump has recently hinted that the UK will avoid US tariffs on steel and aluminum after leaving the EU.

The UK’s freedom to trade favorably with the US outside the EU is likely to create a snowball effect with other member countries wanting to exit.

Italex could be next. Already Italy’s League vows to defy EU on fiscal disciplines. Britain would probably willingly provide guidance to any EU member country wanting to exit. A fragmented EU means that the UK would become top dog in Europe again.

With that kind of talk, one wonders how long will it take for a trade war with China to turn into a hot war, six months, a year? Even the third pillar propping up the dollar, the US military is being tested.

China and Russia are challenging the global dominance of the US.
“While a power war is not inevitable States are preparing for conflict,” according to John Chipman’s press statement entitled Military Balance 2018

So could a dollar hegemony fightback be the biggest black swan geopolitical event that is nobody is yet pricing in? The fragmentation of the EU would have a significant impact on asset prices particularly in the eurozone. If the US decides to save the dollar by sacrificing the euro due to geopolitical reasons then the euro currency risk is being greatly underpriced.

Banks exposed to the largest euro sovereign debts would be the most adversely impacted in the event of euro implosion. Europe’s largest bank Deutsche Bank would not survive.