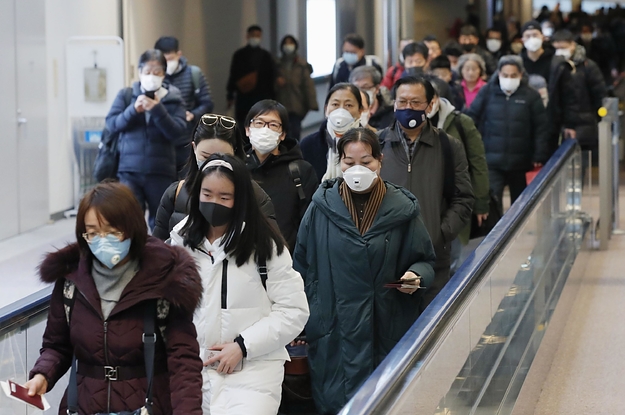 Could the Coronavirus impact on China and the global economy be the straw that broke the camel’s back?

It was only last month that head of the International Monetary Fund, Kristalina Georgieva warned that the global economy risks a return of the Great Depression, driven by inequality and financial sector instability.

Exponential death and infectious rates from the new virus have resulted in a wave of countries placing travel bans on flights entering and leaving China.

Nearly 10,000 flights have been canceled since the outbreak was reported.

Vietnam on Saturday became the latest country to isolate itself from the world’s most populous country.

Moreover, the US, Australia are now denying entry to non-citizens coming from China. Japan is considering also banning foreigners who have recently been to China.

Coronavirus has already jumped borders, there are eight confirmed cases in the United States, including one person connected to the University of Massachusetts-Boston.

The World Health Organisation (WHO) has declared a global emergency on January 30, the main concern is that the outbreak could spread to countries with fragile health systems.

Restricting the movement of millions of people in an industrial society is going to have a wide implication on several sectors.

Coronavirus impact is likely to be felt first in the transportation section, with air travel being adversely affected by the free movement of people

Commercial airlines flying to China and around China will be the first to experience a drop in revenue.

Airlines in Europe, Asia and North America have been suspended to and from China. As Darren Winters points out, that is a big chunk of business travel revenue for many airlines, bearing in mind that China’s business travel spending amounted to approximately 346.5 billion US dollars in 2017.

with nearly 25 million cars and light trucks delivered that year. But 2020 is likely to start on an even bleaker note with the coronavirus. Already some of the most affected areas auto sales have come to a near standstill. Some of the big auto plants in China have closed a number of their plants until February 9 Telesa has also suspended production.

Some analysts are warning that if the coronavirus spreads across China it could entail a further wave of plant closing that might drag into March. If so, this could slash auto production by as much as 30% for global automakers.

China is (was) the world’s factory supplying components for several industries. The auto industry is highly dependent on just in time supply chains. Components industry in China is huge and companies across the spectrum have warned that they anticipate disruptions, so shutdowns will translate into supply chain disruptions.

Coronavirus impact of restricting people’s movements shutting down transportation systems will also reduce the demand for crude, in the short term

US shale oil companies are the most vulnerable as most need crude oil to be around USD 50 per barrel to just break even. Since the beginning of the year, crude oil has plunged by 15%, which could not come at a worse time for US shale producers who are struggling with overproduction losses and bankruptcies.

As Darren Winters points out, in many countries tourism from China makes the largest group of tourists. That is likely to impact tourist hot spots like Paris, San Francisco, Tokyo, Australia, etc.

“All tours inbound from China that have been booked with me were all canceled — I lost 15 tours for February,” 77-year-old Egerton, who has been running Koala Blue Tours in Queensland, Australia for the past 25 years, tells CNN Travel.

That is likely to put more stress on the corporate bond market and that could tip the Fed into making another rate cut soon.

Coronavirus impact on China-US relations is also worth noting.

Chinese authorized silenced doctors and others who were seeing first symptoms starting in early December.

Meanwhile, China is accusing the US of inciting panic over the coronavirus outbreak. “It is precisely developed countries like the United States with strong epidemic prevention capabilities and facilities that have taken the lead in imposing excessive restrictions contrary to WHO recommendations,” said Chinese foreign ministry spokeswoman Hua Chunying.

So this type of posturing is unlikely to resolve a US-China trade dispute.

This new virus is different from others in the way the authorities are handling it. Maybe it is for good reason, bearing in mind that already more people have died from Wuhan coronavirus than SARS. Europe’s Black Death killed a third of Europe’s population in three years. With fewer people, working and consuming that led to a post-plague recession. But the strong survived and with fewer mouths to feed an economic boom followed.